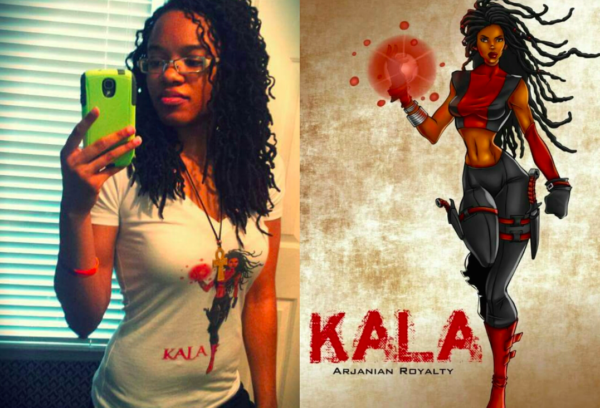 By Gabrielle Clark
Truesdale’s pitch rings with an upbeat optimism. Like many Black women with backgrounds in the corporate sector, her assertive personality reflects experiences that have required her to be more competent than those around her just to gain a seat at the table.

In a strong, yet humble tone, Truesdale paints the picture of a society where the media is filled with complex images of brown people, reaffirming their humanity and a sense of pride in their diverse cultures. Thanks to her imagination, an entire literary universe of empowerment now exists where the superheroes are nonwhite women.

Truesdale’s path to becoming the owner of AZA Comics, a Black-owned comic imprint, was anything but a straight one. Although DC Comics had planted the seeds of storytelling in her childhood, Truesdale was on course to becoming a doctor while attending the University of North Carolina. After realizing her passion was not in health care, but in business, the undergraduate shifted her focus to finance.

“At that point, I envisioned myself as the chief financial officer of a corporation,” Truesdale reflects. After amassing an impressive amount of experience interning at various companies, Truesdale found herself overqualified for the job market. It was then that she felt the itch of entrepreneurship.

Being a boss is often romanticized, especially in the Black community where Black enterprise is viewed as a solution to upward mobility. The first few years of a small business are the most crucial to determining its success. According to the Small Business Association, 67.2 percent of businesses survive their first two years in operation, but only about half are still in operation at the five-year mark. Truesdale’s first attempt at starting a business was not a rousing success,but it provided her with valuable information and solidified her desire to be an entrepreneur.

“It was the best internship of my life. … I thought, ‘Now that I know what failure is like and I’m okay with it, I can do something I always wanted to do,’ which was storytelling, particularly superheroes.”

The AZA Universe Is Born

It was 2013. Armed with little knowledge of the comic business, the long-loced writer got to work contacting as many experts in the field as she could. Networking earned her knowledgeable mentors who passed on invaluable advice gleaned from years of experience and Truesdale absorbed as much as she could. Although she did not yet know it, her background in business training had prepared her to manage a team of creatives, and her love of storytelling insisted she become an author. Truesdale knew she could create an imprint of her own, so she went to work researching the comic industry to find her niche.

The writer quickly observed that not much had changed since her Wonder Woman fangirl days. There were still few comics catering to women, specifically nonwhite women. “I wanted to create something that women could have for themselves, something they could have a voice in,” Truesdale said. “A lot of the things I write and the characters that I develop are what women tell me they want to see.”

Truesdale said she was deeply touched by an email from an Afro-Latina supporter who made a strong case for a Latina character in the AZA Universe. The letter inspired the creation of Ixchel, a technological prodigy raised in Bogota, Colombia.

The entire AZA Universe, down to the publishing format, is designed with nonwhite women in mind. Unlike most comics, which are issued weekly or monthly, Truesdale’s superhero novels are full-length books with illustrated action scenes dispersed throughout. Her readers, many of them working women and mothers with limited time, appreciate being able to hold onto a book and read it at their own pace. Illustrated scenes provide an engaging visual experience that attracts comic lovers.

“The Keepers” series centers around a group of gifted superheroes who, because of danger in their own realm, migrate to Earth and stick around to save humans from themselves.

The Keepers’ leader, Kala, was the deciding factor in whether Truesdale would weave illustrated action scenes into the novel or deliver it purely in prose. Apparently, finding an illustrator who could do justice to Black women’s bodies was no easy task. Truesdale envisioned Kala, an unrivaled warrior and heir to the Arjana realm, having smooth cocoa brown skin and endless locs. She was inspired by the African warrior women of Dahomey and the abundance of historical female leaders in Africa. Truesdale knew that Kala’s look had to be just as precise as the legacy she represents. Fittingly, the hero bears a striking resemblance to Truesdale.

“When it came down to Kala, [the illustrators] were essentially giving her Eurocentric features and putting brown skin on her,” Truesdale said. “They did not have a concept of what Black women’s bodies look like.”

While scrolling on Instagram, Truesdale found Remero Colston, a Canada-based graphic artist from Detroit. Colston and Truesdale bonded over their shared interest in strong female characters and a desire to see nonwhite people better represented in comics. When asked for a sketch of Kala, Colston sent it over in an hour and was hired the same day. In January 2016, Truesdale rolled out the first edition, “The Keepers: Origins.”

Truesdale and Colston began with an idea, three interns and a website. Now, on the heels of its’ two-year anniversary, the AZA Comics Universe is still thriving. The CEO reports that book and merchandise sales are steadily growing between 25-30 percent each month. Still, growth can be sporadic at times. Truesdale notes that things may slow down, but after every speaking engagement, article or press coverage, new orders for Kala T-shirts fly in about a month later. Word-of-mouth referrals also play a big role in the company’s development.

“Right now, we’re trying to put the word out and make a name for AZA Comics,”  she said.

Saving the World One Young Entrepreneur at a Time

Truesdale’s trials and successes with entrepreneurship exposed her to how difficult it can be for Black people to gain access to the resources necessary to build a successful startup. While working as a consultant for a group of venture capitalists, the superhero creator was given an opportunity to assess business plans for hopeful entrepreneurs. She was the only nonwhite person and the only woman with a seat at the table. When the group decided to create programs to build business skills for young people, Truesdale was excited. It was an idea she had nurtured on her own for a long time. During a focus group for the program, Truesdale suggested that the venture capitalists engage students at North Carolina Central University. She was immediately met with resistance.

“To actually see firsthand the level of racism, how we’re literally excluded from discussions at the table … it really hit home for me,” she said. Truesdale knew that in order to encourage more young people of color to become entrepreneurs, she would have to do it herself.

From that aha! moment, the Dare to Be Legendary program was conceived. Launched in May 2017, Dare to Be Legendary is a free, online-based learning lab that teaches business basics to young people who want to start their own companies. Truesdale narrowed in on nonwhite youths and schools in urban communities to pilot the program. She was astonished by the large amount of feedback and the willingness of other entrepreneurs to contribute lesson plans to the program. (For those interested, DBL is currently accepting interested schools and students. Entrepreneurs and investors interesting in volunteering their time, talents and donations are encouraged to contact Jazmin Truesdale.)

Truesdale’s mission for Dare to Be Legendary fit right in with the vision of AZA Comics: that youth can grow up in a multicultural, diverse world where nonwhites have a sense of mutual respect and support for each other, like she was raised.

“A lot of the oppression we face, especially as women of color … overlaps,” Truesdale said. “With ‘The Keepers,’ I just wanted to show that these girls are sisters.

“They respect each other’s differences and struggles, they listen to each other and support each other.”

One thought on “a repost: Black Woman Creates Comics Universe Where all the Superheroes are Women of Color”