How ironic I discuss this topic only a couple of days from my anniversary. But I feel the need to get this off my chest right now, so to hell with it.

I haven’t been married that long. Most would assume that I need more years under my belt to be qualified to speak on the topic of marriage, to spit out some worthwhile wisdom.

Well, I beg to differ.

In the four years that I’ve been “officially” married (not counting two years of courting and breaking up, making up sessions), I’ve learned a lifetime’s worth of wisdom regarding this pastime called marriage. And that wisdom has been supplemented with even more knowledge from speaking with older men and elders who have been married (and some cases, divorced!) longer than I’ve been married.

I have observed many things within the confines of marriage, but there are three in particular that stand out to me, such as:

1.    Man and woman (the definition of a authentic marriage) tend to come into the situation with  unrealistic expectations of who and what their spouse SHOULD be to them. When I decided go through my personal transformation, my wife was supportive when it came to improving my physical health and losing weight, even though she did not like the method that I was going about it. It was major adjustment for her when I dropped meat from my diet, and she continues to this day to remind me how she misses that part of me.

Regarding my intellectually and spiritual growth, she has had major reservations. Giving up religion and traditional concept of God has not gone over well for her. She does not fully respect my newfound opinions on what Black life should be, the importance of melanin, how life and reality is not what it seems, etc. She is weary of the direction that I am going.

2.        In this Westernized version of marriage,  it is virtually impossible to have a relationship (intimate or non-intimate) with the opposite sex, other than your spouse. Surprise, surprise. This one is a given. But if know anything about the nature of man, it is not the most realistic to maintain. Recently in my life, I have came across women who have intrigued me, not necessarily sexually, but mentally and spiritually in ways that have been comparable, and in some cases, more than what I have received from my wife.

And you know the funny thing? I don’t feel once ounce of guilt.

3.         The imagery of a marriage in this society matters a little too much these days. We know marriage will not be “perfect” from any stretch of the imagination. But that doesn’t stop married folk from putting on a front in the midst of family and friends. Everyone wants to play Keep Up With the Jones. Every married couple on some level seeks to strive for that white picket fence, “American Dream” fantasy. Competition, a sacred American tradition, is the sacred underlying factor in all of this.

I’ve never been the competitive type either. At this juncture in my life, I don’t give two flying you-know-whats about what people think about me. Now, my wife on the other hand…

She’s not materialistic whatsoever, but  she does have a very strong tendency to care about what others think about her, and that extends into the family unit. That appears to be a common trait amongst Westernized, Americanized women, no matter ethnicity.

This Westernized, religified version of marriage serves as a microcosm to the current reality that dominates the scene, a restrictive condition to the true nature and potential of the archetypal Black Man and Black Woman.

As I stated in a post concerning the drawbacks of compromising, in reference to individual growth, when both spouses have totally different mindsets it creates problems.  I said it once, I said it twice, and I’ll say it again: MEN CREATE THE REALITY, WOMEN MAINTAIN IT! In my case, I have chosen a mindset that embraces my Black nature, and I desire to create the reality based off of it. My wife, like the majority of our Black women in this paradigm, has the mindset of what I explained in number 3 above (and here.)  And there is the dilemma.

I want nothing to do with that foolishness. It goes against everything that I’m trying to be as a Black Man who is becoming more aware by the millisecond. The sad part about it is that I truly and dearly love my wife, and there is potential in her to cross over into the dark side.

But love is NOT enough in this war for Black liberation.

Despite what has been preached by the state and its sheep, love and marriage are not synonymous with each other. Now, I understand why arranged marriages were prevalent and still occur to this day, basically because it’s not based off the superficiality of love we’ve been duped into practicing these days (Gotta check out “The Science of Love” by John Baines, folks!) Marriage SHOULD be considered a partnership, a business arrangement to achieve a common goal. In the case of liberation for the Black Man and Black Woman and a return back to their archetypal selves, marriage SHOULD be used as a weapon to achieve that goal.

For any other reason, we’re just playing a GAME, like any other card game, board game, or video game we’ve past the time with. That’s what the powers-that-be (or the powers-that-wanna-be) have turned it into, a profitable one on so many levels. And just like any game you play, you have boundaries, rules and regulations you have to abide by.

“NO CHEATING ON THE TEST.”

“NO CHEATING ON YOUR TAXES.”

“NO CHEATING ON YOUR SPOUSE.”

(Side note 1: I can do a post strictly on the word “cheat”, and how the powers-that-wanna-be use the label to keep people in check. I just might.)

I always wondered when it came to the topic of having affairs, mistresses, side chicks or side dudes, the accused would be cursed with that label.

1. act dishonestly or unfairly in order to gain an advantage especially in a game or examination.

2. avoid (something undesirable) by luck or skill.

1. a person who behaves dishonestly in order to gain an advantage.

A couple of questions:

1.     If you told your spouse upfront you  were having feelings or thoughts for another man/woman without physically acting on it, would you still be a “cheater?”

2.    Are you really cursed with sin because you had feelings for another man/woman besides your spouse?

(I’m telling you, you need to check out that book.)

Take a look at nature amongst animals. How many monogamous relationships do you find in the animal kingdom? “But man is greater than animal,” you say. “He should know better than.” Is that your ego talking or are you’re just  repeating what you’ve been told?

Do you know what you are, Black Man and Black Woman? 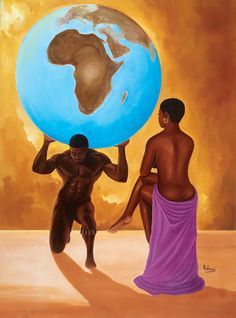 Once upon a time long ago, when Black folk dominated the world stage,  polygamy was not a side-eye taboo. It was our culture. A few countries today still practice the tradition, but it’s not prevalent as it used to be. And definitely not in the regions of the earth that it should be in this day and age.

Every wonder why polygamy is illegal and shunned in the West (the dominant power at the moment?) IGNORE the propaganda, it just so happens the cream-of-the-crop Black Men and Women also reside in the West. Even though the majority of us are the walking dead, our genes are still  second-to-none on the planet. This is due in part to the times of “slavery”, with the mixing of blood between the different captive African tribes.

When the time comes when we WAKE UP (its happening as we speak in bits and pieces), and we practice that culture and walk out our destiny…

The Black Man, who is connected to his archetypal self and knows HIS-story, has the capability to love more than one woman.  That same Black Man will not fool around with any woman outside of the one he already has if they are not of the same frequency, and if it does not perpetuate a reality of Black empowerment and unity that can benefit ALL PARTIES INVOLVED.

The Black Woman, who is connected to her archetypal self and knows her culture, understands and overstands that her worth is NOT determined by the ability to have and KEEP her man. The Black Woman knows her ability to nurture the spark of that man (his seed, which, in the physical form translates to children, and the mental and spiritual form translates to that reality mentioned previously) is of the upmost importance.

In this paradigm, the state has used marriage in its limited form as a tool to keep not only Black folk, but the masses in general, docile, under control, and for accounting purposes. They have certainly made marriage an institution that is CONSUMERISTIC BY NATURE and only benefits those who wish to keep and maintain power.

What is one of the top reasons for divorce (which is another lucrative byproduct from marriage if and when it dissolves, concocted by the state?)

A consumeristic marriage is a prosperous marriage in this reality.

Remember when I said marriage is only a “microcosm” on what occurs on the grand scale?

Can you imagine a marital union structure that doesn’t have to depend on fiat money to be successful? One where there was less competition and more cooperation and sharing amongst one another?

Our husbands and wives would stop looking at each other as their property, and more like unique beings in the human form.

(Side note 2: You apply this thinking in religion, it’s funny how the popular religions of today are styled in monotheism, versus polytheism that was prominent back in the day. Just saying…)

I can go on and on about this, and there will probably be more posts to follow concerning this matter. But I think I’ve said enough to digest for a while on this one.

What I’ve said I don’t say out of spite or misery.  Because besides the occasional argument me and my wife may have or the observations I listed previously, I’m pretty satisfied with my marriage. We have a good situation going on, according the benchmark set by the current paradigm.

I’m just calling it like I see it. I seek  liberation in and around my life on every level; the status quo doesn’t bother her that much. It is only so far we can go before one of us will have to submit and compromise to keep this ball rolling.

Hopefully it’s not muah. But that’s why we play the game, so to speak.