I had a thought earlier this morning along this same idea. Low and behold I come across this article articulating that thought down to the T. 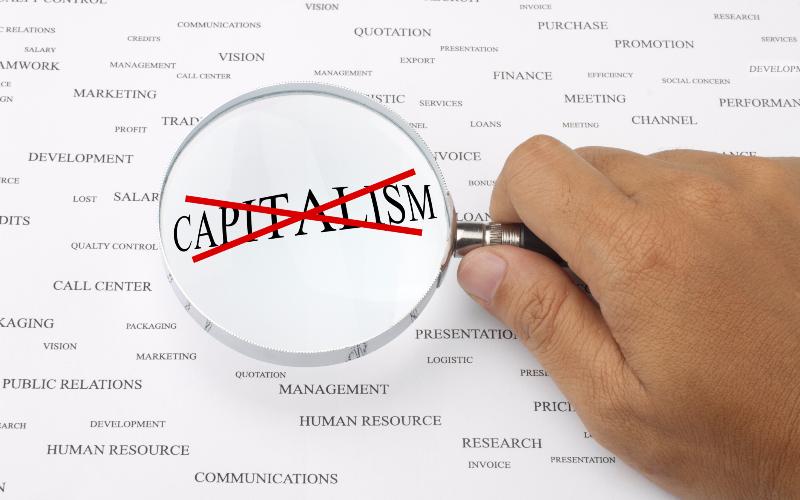 One of the great myths of our time is that America is a capitalistic country. It is not, and has not been close to capitalistic for more than 150 years.

Capitalism is a social system in which an individual’s rights, including his rights to own property, are recognized and all property is privately owned. In a capitalistic society, governments acknowledge that individuals and companies can and should compete for their own economic gain, and the prices of goods and services are determined by the free market. The role of government in capitalistic societies is to ensure that markets function without interference and to protect individuals from fraud and/or the use of physical force by others.

Capitalism is not about greed. Capitalism is about human freedom, or as we term it, personal liberty. As Adam Smith posited in Wealth of Nations, when individuals are permitted to pursue their self-interest through markets, they are amazingly good at finding ways of bettering not only themselves but society as well.

The recognition of individual rights entails the banishment of physical force from human relationships: basically, rights can be violated only by means of force. In a capitalist society, no man or group may initiate the use of physical force against others. The only function of the government, in such a society, is the task of protecting man’s rights, i.e., the task of protecting him from physical force; the government acts as the agent of man’s right of self-defense, and may use force only in retaliation and only against those who initiate its use; thus the government is the means of placing the retaliatory use of force under objective control… In a capitalist society, all human relationships are voluntary. Men are free to cooperate or not, to deal with one another or not, as their own individual judgments, convictions, and interests dictate. They can deal with one another only in terms of and by means of reason, i.e., by means of discussion, persuasion, and contractual agreement, by voluntary choice to mutual benefit. The right to agree with others is not a problem in any society; it is the right to disagree that is crucial. It is the institution of private property that protects and implements the right to disagree — and thus keeps the road open to man’s most valuable attribute (valuable personally, socially, and objectively): the creative mind.

Americans no longer have property rights. Think you do? Try going a year or two without paying tribute to the king (via property taxes) and you’ll see who owns your property. The local sheriff will evict you; the state or local government will seize your property and sell it to the highest bidder or its favorite crony.

Try building a structure on your property… or even remodeling your home. If you don’t obtain the proper permissions (approval for your design, building permits and inspections), you will be fined and forced to tear your structure down. Failure to do so will result in armed agents of the government invading your property, assaulting and incarcerating you until you comply with the government’s demands.

Try damming a creek, tampering with the watershed or capturing water for a pond on your property. You will get a visit from federal agents representing the Environmental Protection Agency and the result will be fines, expensive court costs and possible visits by armed federal agents who will forcibly escort you off your property and into a prison cell.

Try growing livestock or certain plants on your property. Unless you live in an area zoned for agriculture, you will likely get a visit from a local or federal “inspector” who will order you to dispose of your animals and/or uproot your plants in favor of others approved by the local authorities.

Want to inform people about and sell a protocol that experience and use has shown to be beneficial to good health? You must first obtain permission from local and federal agencies, provide proof that your protocol has been tested, tested and retested, regardless of the expense or inconvenience to you. You must then comply with any and all regulations regarding marketing, production, packaging and distribution. Failure to do so will result in seizure of assets, fines and/or imprisonment.

Want to not sell your product for a reason — or no reason at all — not approved by the establishment? That is not allowed and you will find your business shuttered and you will be subject to fines and revocation of your previously-acquired permission to conduct business.

The establishment will tell you that once enter into business you have surrendered your individual rights to the collective, and all your activities must be geared toward the collective good. This is the very definition of force — government force, which is anathema to voluntary exchange and individual liberty.

The federal government works overtime to ensure we are not a capitalist system by passing legislation and enabling federal alphabet soup regulatory agencies to create rules favorable to certain businesses and unfavorable to others. Congressweasels pass tax laws to encourage and discourage behaviors.

The federal government subsidizes certain products, driving up prices and encouraging unsound business practices that skew the market. There are still price controls on food products that were put in place during the Great Depression.

The Federal Reserve, which is not a federal agency but a privately-owned bank, prints money to infinity, which encourages mal-investment and skews the market. It is depreciating your currency.

Here is what has happened to the American people: The money creators, the Federal Reserve and the U.S. Treasury as symbiotic partners, are creating non-substance (fiat money) and “buying” (stealing) substance with it.

Has anyone wondered why “federal money” never gives out? As admitted in congressional testimony and in Federal Reserve publications, the federal money creators can create any amount of “money.” Of course this money is non-substance fiat. It is imaginary numbers that appear either on green pieces of paper called dollars or as computer symbols.

The key word to describe fiat non-substance is infinity. This imaginary money system can be created to infinity and indeed is on its way. The American people (and the world) believe that this non-substance is real money. This is an exercise in an unbelievable and unimaginable delusion that is accepted by the mind as real.

This is socialism at its most perfect creation and it is doing exactly socialism’s work of transferring the wealth and savings of the American people to the state without payment.

Every writer, commentator politician in America refers to the U.S. as a democracy of free enterprise capitalism with individual privacy and property rights. We live in a fiction of freedom perpetuated with semantic corruption that has evolved us into economic fascism. Language and words that support a free society have been turned inside out.

The American economic system, and in fact the world’s economic system is failing, and that failure is being attributed by many on the left (and some on the right) as a failure of capitalism. This is a big laugh to any sober person.

All governments are fronts for monopoly capitalism, and monopoly capitalism has many names: fascism, socialism, communism and democracy. Big business has and will promote every ideology and philosophy known to man to disguise its madness for profits. But one equals the other. They are all immoral systems that use the power of government to exist and to suppress human freedom.

The extraordinary level of material prosperity achieved by the capitalist system over the course of the last 200 years is a matter of historical record. But very few people are willing to defend capitalism as morally uplifting.

Sadly, it’s not just the progressive left and ignorant millennials that oppose free market capitalism. In any discussion forum where true or laissez-faire capitalism is discussed, “conservatives” are quick to make the disclaimer that “we must have some regulation” or, “we can’t have unfettered capitalism.” In truth, most so-called conservatives are really closet socialists. This is a testament to the powerful propaganda we are subjected to.

Throughout history there have been two basic forms of social organization: collectivism and individualism. In the 20th century, collectivism has taken many forms: socialism, fascism, Nazism, welfare-statism and communism are its more notable variations. The only social system commensurate with individualism is laissez-faire capitalism.

The return of capitalism will not happen until there is a moral revolution in this country. We must rediscover and then teach our young the virtues associated with being free and independent citizens. Then and only then, will there be social justice in America.