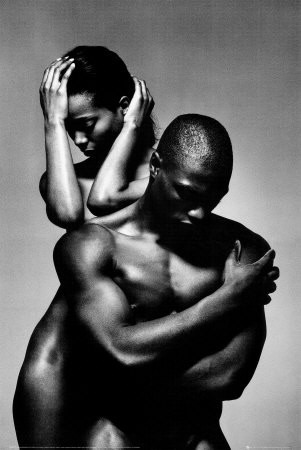 I had this post on the burner for a couple of months now, going back and forth on many different perspectives concerning the BLACK MAN-BLACK WOMAN relationships. My ORIGINAL intentions for this post were to address the situation of how our BLACK WOMEN are caught up with the  traps of Western civilization (or the  MATRIX) and how it makes the lives of  SANE BLACK MEN a living hell just  to keep them pleased and satisfied  within those confines.  And ultimately, BLACK WOMEN had to change their MINDSETS so that BLACK MEN can be the MEN we were DESTINED to be.

In the middle of typing this post, I realized BLACK MEN are the NATURAL LEADERS, so when we CHANGE and stand our ground, BLACK WOMEN will follow suit.  And honestly, my ORIGINAL viewpoint came from bruised emotions from past interactions with women. I try to keep my PERSONAL emotions in check in this blog; my better judgment prevailed (thankfully!) and my viewpoint changed as well.

And this is the end result:

From my OWN marital experience (and many, many others), I have gained a better understanding of the power dynamics how the man-woman relationship SHOULD operate.

I concluded that from the AFRICAN/BLACK-MELANATED perspective, the ONLY, ORIGINAL perspective that matters…

MEN AND WOMEN ARE BOTH HEADS IN A RELATIONSHIP WITH DIFFERENT BUT EQUALLY IMPORTANT ROLES!

Together, a mechanical engineer and industrial designer design blueprints for a new car. The engineer will design that car  so it will fulfill its ORIGINAL purpose of  getting from point A to point B effectively and safely.  The industrial designer will design the car to be user friendly for its passengers, as well as look presentable during travel.

As the engineer, The MAN will make sure that car PROVIDES THE SOLUTION TO THE PROBLEM.  As the industrial designer, the WOMAN will concern herself with how it LOOKS AND FUNCTIONS.

Both share a COMMON GOAL for the BENEFIT of BOTH!

That’s the basis of the MAN-WOMAN relationship!

Unfortunately we live in a patriarch society that glorifies and honors ONLY one type of man…the WHITE MAN!

A deeply INSECURE UNHUMAN CREATURE who has pillaged and decimated many nations of other men, women, children and their land over THOUSANDS AND THOUSANDS of YEARS.

Unfortunately, just like the followers we are, BLACK MEN have adopted that behavior.

The minds of BLACK WOMEN have been COMPROMISED, due in part to that, as well.

Currently, BLACK MEN are at a SEVERELY weakened state.

We are already well-versed with situation concerning our culture being stripped away from us during the Slave Trade and whatnot. Such as gorillas and other animals that are taken out their natural habitat for the BENEFIT and AMUSEMENT of others, our plight  resembles theirs in a tremendous way.

The most UNDERRATED aspect of the BLACK MAN being taken away, or ENSLAVING himself, to another way of life is that in the process lost his manhood. If you have been reading this blog for ANY lengthy amount of time, you should understand that BLACK MEN, BLACK-MELANATED MEN, are different from every other man on the earth.

We can’t be ANY OTHER TYPE OF MAN BUT A BLACK-MELANATED MAN.

We don’t understand the metaphysics of nature.

But we don’t understand OURSELVES.

As for the BLACK WOMEN, she has been bedazzled and bamboozled by the lifestyle and Western philosophy of the-powers-that-be, or Massa.

In her mind, she believes the  only way to survive is to accept the ways of the Caucasian or European, denouncing herself in the process, because she has no one else to turn to. She has shunned the BLACK MAN for all his shortcomings and failures…

for NOT being the NATURAL visionaries that we are.

How could she truly love and RESPECT a man who only IMITATES another type of man, the WHITE MAN?

To survive HIMSELF? To provide for his FAMILY?

Only to remain in SUBSERVIENT state nevertheless.

WE ARE ONLY IMITATIONS, BLACK MEN!

WE ARE NOT OUR OWN MAN.

According to the statistics, BLACK WOMEN are least likely to marry outside of their race than any other group, and are ALSO the least likely to get married AT ALL. Instead of throwing out the tired ole “black women are bitter, mean-spirited *itches” comments, take another look at that situation.

Maybe from a spiritual, metaphysical perspective, on the low, BLACK WOMEN have the backs of BLACK MEN.

Maybe…JUST maybe…she realizes on deeeeper level that one day the STATE of BLACK MEN will naturally rise to the top and take  our rightful place as ORIGINAL MEN OF THIS PLANET.

Overall, BLACK WOMAN as a whole are NOT stupid. In fact…

…they are the SMARTEST, MOST INTELLIGENT BEINGS ON THIS PLANET! (Yeah, I’m kissing their ass, guys!)

Instinctively and intuitively, a smart, CONSCIOUS BLACK WOMAN knows she wants a GOOD, STRONG SEED sewn in her garden, provided by the best possible source: A STRONG BLACK-MELANATED MAN!

She won’t settle for less.

And I have NO problem with that.

But will she follow suit when the BLACK MAN RISES AGAIN?