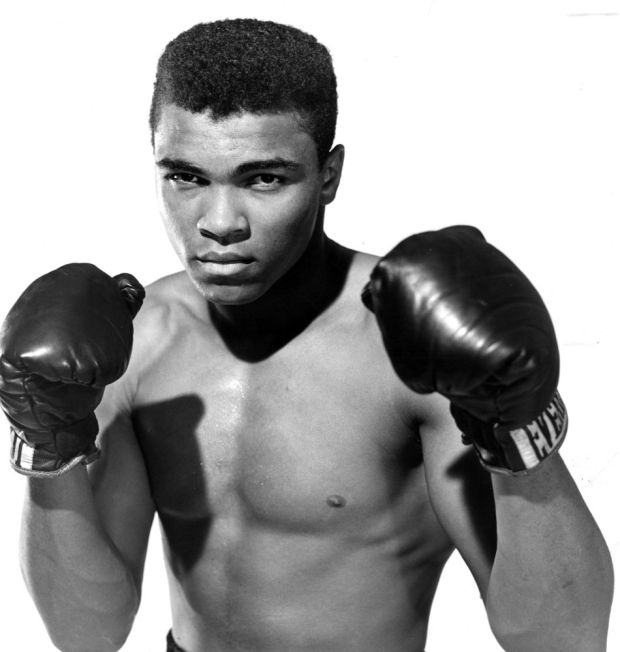 We lost another legend this past Friday evening June 3, 2016, known as “The Greatest” Muhammad Ali (born Cassius Clay.) Unfortunately, it was a LONNGGG time coming. Due to the violent nature of the boxing profession, Ali became riddled with Parkinson’s Disease (a degenerative nerve disease) in his latter years after his retirement from boxing. It was said that he died from complications with from respiratory issues.

Considering that Ali’s body was ALREADY COMPROMISED from years of physical trauma, severe emotional distress adding up to the aforementioned Parkinson’s Disease, it shouldn’t shock ANYONE that something involving a natural bodily function of breathing to kill off “The Greatest.”

Ali was truly one of a kind.

I wasn’t born when Ali was at the peak of his powers not only as boxer, but as a BLACK-MELANATED human being. So only know what has been shown in documentaries, featured films, and books. It seemed that Ali was not your normal everyday athlete who ABSOLUTELY had no trace of CONSCIOUS whatsoever (**cough** Michael Jordan **cough**), although during his time, athletes (BLACK-MELANATED athletes) like him  were a little more commonplace than they are today with the likes of Jim Brown, Kareem Abdul-Jabbar, Bill Russell and the such.

The times with which they were on top called for that type of athlete, especially during the 60s and 70s where hot topics such as the Civil Rights Movement, racism, segregation and prejudice, and the Vietnam War dominated the scene.

Oh, how things have NOT CHANGED AT ALL OVER THE YEARS!

My original thought was to say that we NEED that type of athlete during this time as well.

To help bridge the gaps that have been slowly separated again over the last 50 to 60 years.

And maybe that was the problem (or PLAN, depending on which side you view it from.)

Muhammad Ali and athletes of his ilk started something that would have been MAGNIFICENT for the people, BLACK-MELANATED PEOPLE, they represented and supported them through THICK and THIN.

Something that would cause BLACK-MELANATED PEOPLE…

To graduate from meaningless athletics that only cater and benefit the elite of society and their machination known as THE MATRIX!

To be the BLACK MEN and BLACK WOMEN we were destined to be, besides what is expected of us by the-powers-that-be.

To help produce the SELF-DETERMINATION in the MINDS of BLACK-MELANATED PEOPLE to escape the whims of Massa and build the civilization that will EMPOWER and ENHANCE EVERY ASPECT OF THEIR LIFE ON THIS PLANET!

That something NEVER matured.

And on a GREATER scale, the collective CONSCIOUSNESS of OUR PEOPLE NEVER MATURED.

Somewhere along the way our athletes became COMPLACENT, they became COMFORTABLE. They begin to buy into the trickeration of DIVERSITY AND UNITY OF ALL MEN.

As I said earlier, maybe that was the PLAN all along.

Integrating into their system was never for OUR benefit. It was for Massa’s.

And maybe those athletes never truly understood what was going on. How this whole “WE ARE THE WORLD” nonsense would create havoc for their people. I only hope that if they did, they would have tapped out of the MADNESS a LONG TIME AGO.

OR…maybe they DID. Which I completely understand. We ALL know what happens when we speak out AGAINST the-powers-that-be.

If you think I’m off on this, only look at our situation today. You can make the case that the PLIGHT of BLACKS have gotten WORSE.

THEY HAVE GOTTEN WORSE!

When are going to start looking INSIDE instead of OUTSIDE OURSELVES for our LIBERATION?

Muhammad Ali did many great things within his 74 years of life on this planet, in this PARADIGM. He inspired, and CONTINUES to inspire, the multitudes of people, not only BLACKS, to be more than what is required of themselves.

His determination to be “The Greatest” is something that ALL types of people can relate to.

And what if Ali and athletes like him during that time were only meant to pass the torch to future generations of BLACK athletes,who themselves would be more than their physical gifts offered,  to further the CAUSE of BLACK-MELANATED LIBERATION?

AGAIN…WHEN ARE WE GOING TO STOP LOOKING INSIDE INSTEAD OF OUTSIDE OURSELVES FOR OUR LIBERATION??