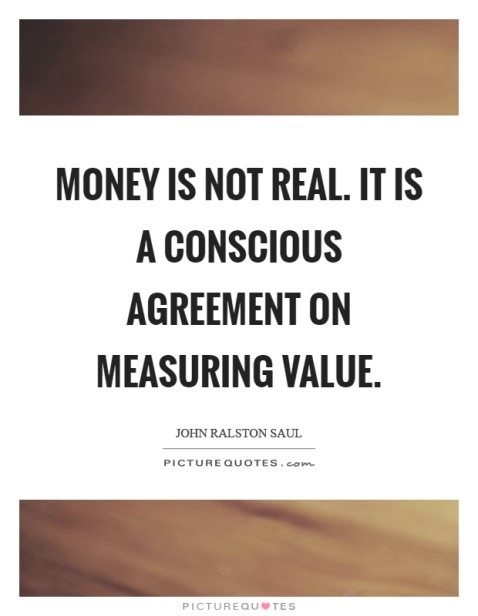 This subject has been on my mind for a considerable amount of time, and I’ve been doing some major reflection in general because of it. Pretty much everything that we do or connected with in this society is attached  to money, or  currency.

You won’t live a decent life.

You won’t amount to anything.

YOU DO NOT MATTER!

That’s a true fact if you choose to live and be involved in this MATRIX, this THREE-DIMENSIONAL ILLUSION. I have heard a many of people, especially BLACK FOLKS, make statements such as:

…or my personal favorite, “It takes money to make money.” Very true…if you play by the rules of this MATRIX.

We give value, or we give life, to DEAD PAPER! Paper that is manufactured from a TREE, a living organism, that was KILLED so we can thrive within this ILLUSION, to play this manufactured GAME OF LIFE that we’re trapped in!

(Don’t me wrong, some of us gifted individuals may use DEAD PAPER to create masterpieces of literature and poetry, visual arts, etc. Thus, that creativity  brings BACK LIFE in a different form/expression. There can be BALANCE within the action of CREATIVITY by producing LIFE from DEATH.)

Whether you use DEAD PRESIDENTS, debit cards, or Rush cards, the concept of MONEY is nevertheless a DEAD IDEOLOGY! Even the idea of building credit by getting into debt (through home ownership, credit cards, auto loans, school loans, etc.) is the biggest CON GAME ever to be taken seriously in the HISTORY OF HUMANITY!

We are so bought into this ILLUSION.When are going to LET GO?

How is it possible that the U.S. federal government can bail out  crooked banks like Wells Fargo and Bank of America with billions and billions of dollars,  and the supposedly US National Debt is $19.5 trillion dollars at the moment…and counting? Where did that money come from? So the government can just PRINT money from out its ASSHOLE, divvy it out where they see fit and all is HONKY-DOREY, huh?

Why can’t they print money to end poverty? To create a quality education system for everyone? To raise minimum wages to a reasonable living standards? To pay off its own debt?

The more I think about the actuality of the situation, the  more pissed off I become, and quite honestly, a little distraught with the madness. Because the sad reality (and it’s truly sad from my perspective) of this entire dilemma is that we validate this ENTIRE FACADE EVERY DAY ! Everything that we need to survive, want to secure a tolerable existence, desire to fulfill our life’s purpose requires that we participate in the MAKE BELIEVE system of MONEY. We validate the system unconsciously…

…whether we’re CONSCIOUS or not, on any level!

As I type this post for publication, which requires an Internet service to reach the multitudes which entails the NEED for MONEY, my actions validate the SYSTEM. So what’s the DAMN point?

Again, we are so bought into this ILLUSION! When are we going to LET GO?

When have you ever needed MONEY to start a REVOLUTION? To make REAL CHANGE?

Having our BLACK businesses is nice and dandy.

But what are building toward? Are we a cohesive unit? Do we have the same goals in mind?

Or are we going into business for self, as individuals? To make MONEY, just to add more duckies to the bank account to play with, sticking with this ILLUSION, the status quo?

Building within this SYSTEM is NOT sustainable for us in the long run. Another reason that the SYSTEM of MONEY still reigns supreme is due the HIDDEN AGENDA of  promoting  a unified, multicultural nation which DOES NOT EXIST.  It serves as a medium between those that DO NOT have similar goals, similar mindsets and to be honest, similar MELANIN CONTENT. So in essence, that DEAD PAPER personifies a  DEAD RELATIONSHIP outside the exchange of CURRENCY  on a metaphysical level.

At some point BLACKS as a whole must graduate back to a BARTER SYSTEM , the exchange of services and goods instead of currency, the most solid economical relationship  you can have.

One that is also RESPECTFUL to Mother Nature as well.

If we are of ONE MIND and  ONE SPIRIT, it is achievable! There would be not issue of TRUST  when it came to maintaining the ECONOMICAL VITALITY of the community. The goals for EVERYONE would be the same.

First, we must let go of the ILLUSION of MONEY and get back to the REAL!

15 thoughts on “Having a Moment: We’re Infected by the Dead Ideology of Money”