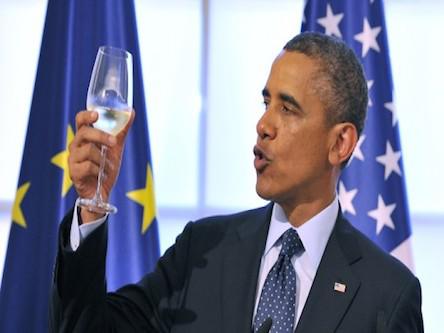 “Only gridlock saved Social Security and Medicare from being privatized during his Presidency.”

Thousands have taken to the streets across the country to protest Donald Trump’s victory in the 2016 elections. The protests have mainly centered on Trump’s racism, sexism, and anti-LGBTQ rhetoric spewed during his campaign. Protesters have yet to wrestle with Trump’s positions on foreign policy and trade that made him a pariah to the majority of the ruling class. The struggle against capitalism and imperialism in the US remains immature even in the midst of positive growth in the movement against police brutality and racism in recent years. While Trump’s overt bigotry gives cause for protest, there is one benefit of the Trump moment that should not be understated. That benefit is the much needed conclusion of the Obama era.

Democrats across the US are in a state of mourning over the departure of Obama. Democrats heralded Obama as the quintessential professional and consummate politician. His celebrity was peppered by the appearance of intelligence and rationality in the face of so-called Republican “obstructionism.” Obama’s rule was advertised as a victory for the Black Freedom movement. His Administration possessed a vast marketing apparatus that defended him as the lesser-evil alternative to the racist vitriol of the White Man’s Republican Party.

“Obama’s rule was advertised as a victory for the Black Freedom movement.”

Black Agenda Report was one of the few on the left that warned of the dangers of Obama in 2008. Once elected, Obama became virtually untouchable. Criticisms of his policies were condemned as racist and insensitive to the needs of Black America. The needs of Black America and the entire left for that matter suddenly became aligned with whatever Obama did. Obama moved forward to protect the banks, escalate war, and erect the largest national security state ever assembled. He instantly became the austerity President, waging a war of privatization on public education with the expressed plans to do the same to Social Security. Only gridlock saved Social Security and Medicare from being privatized during his Presidency.

The full scope of Obama’s legacy has been discussed in earlier issues and will not be analyzed here. What is important is that the left will no longer have Obama to defend its alignment with US imperialism. No longer will the left be able to fall back on the first Black President to sanitize his record. Obama’s immigration policies deported nearly 3 million undocumented immigrants with little protest. His Administration painted itself as a friend of women and LGBTQ identified people despite the fact that his policy of proxy and drone warfare murdered tens of thousands of women and children in Yemen, Syria, Libya, and Honduras.

“The left will no longer have Obama to defend its alignment with US imperialism.”

Obama was able to conduct a greater assault on oppressed people than the prior Bush Administration, making him the most effective evil Wall Street could buy. Obama took over as President in a period where the US was mired in two unpopular occupations abroad and an economic crisis at home. These conditions prompted the ruling class to choose Obama as the required form of counterinsurgency necessary to crush resistance before it started. After making a number of promises to end “dumb wars” and institute a single payer healthcare system, Obama entered office ready to the bidding of the ruling class. Eight years later, Black America is in a worse condition than before, working class people as a whole have lost ground to a low-wage economy, and the world is closer to a World War III scenario than at any point prior.

The massive protests to Trump’s victory are in part a release of popular energy brought on by the departure of Obama. Unrest began with the formation of the Occupy Wall Street and Black Lives Matter movements. However, neither of these movements articulated Obama’s role in creating the conditions for social insurgency and movement. The 2016 elections changed the landscape dramatically. The Sanders and Trump campaigns set millions into motion in protest of the two-party establishment. Obama’s departure will be another breath of fresh air into the internal rot of the imperialist system. It is thus important to ensure that the protests against Trump are not allowed to be channeled back into the Democratic Party graveyard.

“After making a number of promises to end “dumb wars” and institute a single payer healthcare system, Obama entered office ready to the bidding of the ruling class.”

Obama will leave Trump a set of conditions that he cannot possibly maintain without popular unrest. Obama departs office only inches from World War III with Russia and China. Poverty and wealth inequality worsened under his administration. Not even clever distortions of statistics could hide the large number of workers currently unemployed or underemployed in the low-wage economy. School closures, food stamp cuts, and bank bailouts have unleashed the neo-liberal wasteland that Trump spoke about in his campaign.

It appears early on that the left has rejected the viability of Trump’s calls to regulate the banks and renegotiate trade deals in favor of working people. Many have ignored Trump’s “populist” rhetoric and have focused all the energy of resistance on his white supremacist proposals to ban Muslims and deport millions of undocumented people. However, this moment is just as much about Obama’s departure as it is Trump’s arrival. The US imperialist system is facing multiple crises that relate directly back to the economic stagnation of global capitalism. It would be a mistake not to demand Trump stay true to his “populism” just as it was a mistake when the left failed to demand Obama stay true to his promises. Whatever the case, the departure of Obama is a welcome site, and the left should use the room afforded by it to wage an intensified effort to build the organizational basis for social revolution in our time.

Danny Haiphong is an Asian activist and political analyst in the Boston area. He can be reached at wakeupriseup1990@gmail.com

8 thoughts on “a repost: Obama’s Departure is One Reason to Feel Optimism for Trump’s Arrival”