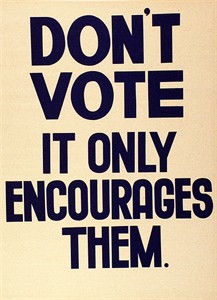 This is going to be short and sweet today, fam!

These are my thoughts and personal opinions, and I know that the current presidential election has been one of  most volatile  (and downright ridiculous) elections in recent memory. The sad thing is this circus show is not unprecedented, these types of tactics to “herd the sheep” to vote for the candidate the powers-that-be  have already preselected are not new. But we, especially my Melanin-Dominant brethren in this country, seem to have an obligation to the ones who came before us to vote since they risked their lives for the right to vote. If they only knew that the Civil Rights Movement and the push for voting rights were the ultimate push for participation, certainly not emancipation, into this corrupt system. A system that cannot survive without a permanent underclass, slaves, or in today’s standards, debt-slaves! No matter what creed or color!  Our right to vote is only given to us to make us feel like we matter. But the casual observer of current politics should know that ALL politicians on EVERY level, no matter their affiliation (because they’re ultimately one in the same) are beholden to the whims of corporations, the elite. They both work hand-in-hand. In fact, the U.S. government is practically a corporation in its on right! Look it up for yourself ( and I will have a post on this later as well.)

So why indulge them by voting?

Subconsciously ( in some cases, consciously) you’re giving them permission to continue the madness.

I guess ignorance is bliss.

I’m not voting. I refuse to take part in the madness. it doesn’t matter who I vote for: Democrat, Republican, Independent, or Green! One way or another, they’re loyalties will not be to the people, whether they want them to be or not. They answer to a higher order, and it’s definitely not God!

Think out this before you unwittingly cast your vote today when you’d be better off eating some GMO McDonald’s, etc.
Peace and Love to my Melanated family,

16 thoughts on “Food for Thought: The Voting Process, Your Participation = Validation for the Matrix”